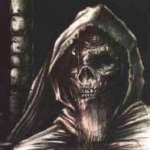 One underground label that successfully holds the blood spattered flag of old school Grindcore and Death Metal waving high above is US-based Razorback Records who delivered a good number of true highlights in these two subgenres of extreme music by releasing material of GHOUL, COFFINS, LORD GORE, SPLATTERHOUSE, BLOOD FREAK, MAUSOLEUM, IMPALED / HAEMORRAGHE etc. Also MACHETAZO from Spain stand totally in the label’s tradition of powerful, straightforward and hard-hitting old school Grind / Death Metal and their 3rd exhumation has all trademarks to satisfy anyone into this style. A raw, violent guitar sound, fierce, fast and fucking brutal drumming, low growled vocals with a few screams now and then, overall classical 90s inspired material awaits on “Sinfonias Del Terror Ciego”! The Death Metal overtone and dark atmosphere manifesting also in the artwork and lyrical concept basing on the classic “Blind Dead” – series of movies are what I dig especially about this release since it does not go into the simple gore-orgy-style nor the political segment of Grindcore. Though MACHETAZO’s songs and musical elements are somewhat repetitious due to their old-fashioned stylistic formula, with slower starting tracks like ‘Diebla Funebre’ (featuring Chris Reifert), a funereal instrumental like ‘La Noche De La Gaviotas’, the well-dosed number of intros, and the mid-tempo groove of ‘Cripta’ the trio does a lot to avoid monotony and succeeds. “Sinfonias Del Terror Ciego” is a more than solid album that kicks ass, entertains with its puristic musical approach and gloomy charm. Really cool! www.razorbackrecords.com