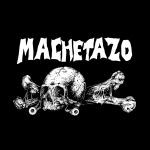 We had “Ultratumba” released back in 2006, a compilation of most, if not all 7″es and extra material MACHETAZO released between 1998 and 2004 put out by Living Dead Society. MACHETAZO, the Spanish gods of Grindcore, Death Metal and all in between, a band with many releases, releases that are all quite hard to get hold of now, and that weren’t always that easy to get ones hands on back when they were originally released, so I think I speak of many, when I say “Ultratumba” was and still is a killer release with tons of great material. Now it has finally become time for “Ultratumba II” served by the Polish label Selfmadegod Records. A run down of the EPs released after 1998 until the untimely demise of the band. We are getting a lot of bashers and a ton of cover versions, served quite delicious. Who haven’t dreamt about hearing an even more Death / Thrashy and gnarly version of KREATOR’s ‘Tormentor’ or a freezingly cold and even more punkish version of DARKTHRONE’s ‘Skald Av Satans Sol’ from “Transilvanian Hunger”? That track is hit with such a nerve, weight and great vocals! The original MACHETAZO songs are as most of the time, intense and straight into your face, with a few twists and turns here and there. The band has left quite a legacy behind, some good albums, some great EPs, fine splits and wasn’t there a live album as well? Just the EP, where WINTES IN OSAKA has remixed two tracks into their furious and insane noise universe, makes this album worth its while, so go grap it while it’s here! March ör die: www.facebook.com/machetazo.official, www.selfmadegod.com