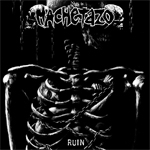 Sometimes even musical institutions pass me by. The Death Grinders MACHETAZO from A Coruña, in the Spanish area of Galicia, are around for nearly twenty years now and released four albums and billions of EPs and split records during the years. Now they are here with their fifth full album "Ruin", the first stuff I heard of them so far. My investigation reported that this duo (with drummer and mastermind Dopi also doing vocals) got their logo created by none other than Chris Reifert (of AUTOPSY fame), which leads us on a trail how MACHETAZO sound – at least sometimes. The thunderous opener ‘Horca’ kicks off the album furiously, like AUTOPSY on an adrenalin boost. Too sad to say that "Ruin" flattens out a bit after this killer with two pretty uninspired Death Grind songs before ‘Espectro’ and ‘Fauces’ get back on the track with those brutal sludge grooves I like about early AUTOPSY. Then ‘Tanatorio’ really gets out of the line, for this wicked Doom monster reminds me of the mighty WINTER (does anyone remember these gods?) and would have fitted perfectly on their "Into Darkness" album. Slowly rotting riffs and guitars that somehow even remind of WHILE HEAVEN WEPT. Great song, the outstanding highlight on "Ruin". After two more a little uninspired songs, the way better ‘Tétrico’ starts in quite groovy, before the song becomes faster. But it’s just the overture for the album closer ‘Ruinas’, the quasi title track, which is completely unusual for "Ruin", as it comes along as a flawless sludge monster, more than eight minutes in length and completely without vocals. All in all, "Ruin" is not just a typical average Death Grind record, but a pretty weird and often very surprising record, that needs a few more run-throughs to filter out some fine highlights. Check www.doomentia.com or visit the band at www.facebook.com/officialmachetazo or www.machetazo.org