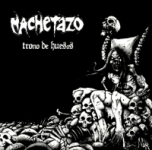 I gotta admit that Grindcore ain’t exactly my favourite form of music and therefore my knowledge is rather limited. So, instead of making a fool out of myself I will just feed you with some facts about Machetazo instead, based on their bio. In 1994 three guys from the 90s underground scene cult death-grind act Frustradiccion decided to play some Noisecore stuff just for fun. Their first demo “46 Cabezas Aplastadas Por Un Yunque Oxidado” still featured raw material in the vein of Anal Cunt and Sore Throat, while the second demo “Realmente Disfruto Comiendo Cadaveres” already was supposed to be more in the Goregrind vein, still with some Noisecore elements though. After a 10″ MLP and split 7″es with the Japanese bands Corrupted and Rise Above, Razorback Records signed Machetazo in 1998 and their first full length “Carne De Cementerio” finally got released. At the time they mostly got compared to old Carcass, Autopsy, Repulsion, Impetigo… Another split 7″ with Bodies Lay Broken, a MCD with Abscess and their contribution to the tribute albums to Impetigo and Carcass followed until several line-up changes forced the band to take a break. At the end of 2001 they finally managed to recorded their new CD titled “Trono De Huesos”, which we are dealing with now. What you get is fourteen tracks of extremely raw’n’dirty Grinding madness (incl. a cover of MOTÖRHEAD’s ‘Ace Of Spades’), musically somewhere between old CARCASS, AUTOPSY and TERRORIZER (just to give you a little hint of what to expect here). Genre worshippers should easily freak out on the band, so I better cut the crap now. All further info you may as well get by contacting the label directly: www.razorbackrecords.com