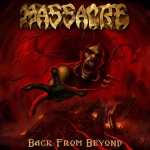 MASSACRE
Back From Beyond
(Century Media Records)
70:29min

There are bands that are connected with a certain member in a way that cannot be easily explained… a member that takes the identity of the band as his own even if he might or might not be a founder. MASSACRE is one of those bands, and the name of the man is Kam Lee. But then again we live in an age where, for reasons unknown or certainly for reasons we do not care about, some band names are stuck with some band member that have very little of the essence of the band. And that is what happens with this third album from the Floridian Death Metal machine. You can recognize that the riffs are there, that some members are there, but something is missing. And let me tell you that the vocal delivery is not bad in any way. But Kam Lee belongs to that elite of vocalists that were there in the beginning and thus set a really high standard, alongside Chuck Schuldiner, Jon Tardy, Tom Warrior, Troy Dixler, Jeff Becerra… yes, up in those leagues. And while Edwin, the new vocalist, is doing a good delivery, the shadow of the one overlord of Death is there, and it is quite too strong I am afraid, to escape his legacy. Something that shines more while listening to the new version of ‘Corpsegrinder’ and the DEATH cover of ‘Mutilation’ (that come as bonus songs on the digipak edition), good versions but paling before the original. The band actually was able to recapture the production and guitar tone found in “From Beyond” and damn, one can almost feel it is Bill Andrews playing the drums, as the new drummer’s style is almost identical (I have to disagree here – while Bill Andrews played in a very simple, yet totally effective style, Mike Mazzonetto adds a little bit too much to each song… in my opinion MASSACRE songs are meant to be played way more straight ahead and stripped to the bone – Frank). So, we are left with only one original member in the form of guitar player Rick Rozz, and a band member that has been with the band a lot of time, although not since the beginning, bass player Terry Butler. Still, with the credentials of this impressive line-up, this effort falls short of their debut album. Certainly it is above the weird “Promise” album, but even in that, I find most of the songs in a very similar tone, something that was also true with their debut album, yet, they have lost a few of those hook riffs they used, and the ones presented here are not as grotesque attractive as it was 23 years ago. Even the cover art is like a re-make of the cartoony looking debut (which was never really of my state, a lot less the original pink one). Again, I must be honest and say this is quite above average many other releases out there, and whilst I am also afraid that Kam’s vocals would surely have added a bit more of enjoyment to the songs, it will still remain in the shadow of their debut, and there are other bands which were originally influenced by them, that are making things in a better way, like DESECRESY, GOREPHILIA and ATARAXY just to name a few. Not bad, but then again I was actually expecting something more. www.facebook.com/massacreflorida, www.centurymedia.com