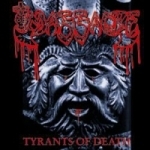 It’s kinda strange that it took so long until these classic recordings officially were made available again via CD, especially considering the fact that already almost every third-rate underground act re-releases their demo(s) this way. Florida’s MASSACRE are a legend though and without a doubt one of the forerunners of the whole Death Metal movement, so this whole project here is more than justified. Kam Lee (vocals), Rick Rozz (guitar), Bill Andrews (drums) and Terry Butler (bass) all ended up in early incarnations of DEATH, Allen West (the guitarist on the first demo) in OBITUARY, while original bass player Michael Borders unfortunately remained kinda unknown to most younger Death Metal kids. So, it’s even more cool, that it was him who made this release possible after all. “Tyrants Of Death” features both classic MASSACRE demos, the 3-song debut tape from April 1986 and the 4-song follow-up from November of the same year (both also became known as the “Aggressive Tyrant” and “Chamber Of Ages” demos). Besides a couple of original versions of tunes that ended up on the band’s Earache debut full length “From Beyond”, there’s also songs that never made it on any album of this Florida bunch, like ‘Clangor Of War’, ‘Aggressive Tyrant’, ‘Death In Hell’ and ‘Mutilated’. Additionally you’re getting an instrumental rough mix version of ‘Cryptic Realm’, which wasn’t finished in time to be included on the second demo as well as a good sounding live-show recording from a gig they played at the Rock City club in Tampa, Florida on May 25, 1986. I suppose that this was the showcase-gig for Goreque Productions, the label that David Vincent used to run before joining MORBID ANGEL, because he was part of the audience that night. Apart from the usual demo standards, the set consisted of another three non-album / -demo tracks (‘Infestation Of Death’, ‘Perpetual Domination’ and ‘The Traitor’), so even those of you who already own the regular MASSACRE releases should get a kick out of it. Not mentioned on the sleeve is a secret bonus track (probably due to legal reasons?!), which turns out to be a live version of one of the most popular MASSACRE / early DEATH tunes (about a corpse…). The booklet features lots of classic pictures and old concert flyers as well as excerpts of interviews with Michael Borders and Kam Lee (courtesy of our website), so I don’t see any excuse why you should miss out on this. Forget about lousy bootlegs. This is the real deal, transfered from the original recordings, so make sure to order yourself copy! All further info and ording information you may get from www.iron-pegasus.com.