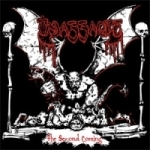 With all the cool re-releases lately it was pretty obvious that it would only be a matter of time until these long lost MASSACRE recordings would finally be released officially as well (a bootleg was already circulating a couple of years ago)… Too bad though that the packaging turned out completely disappointing and does no justice to the band’s overall value at all. Just a plain two-sided inlay instead of a booklet and no real backing info, apart from the recording line-up and a short note that this was released with Kam Lee’s permission and that the songs were intended to appear on MASSACRE’s second full length album, but rejected by Earache Records… Kinda strange that the same label released the shitty "Promise" album instead later on, isn’t it? As far as I know, these are demo versions of six songs that were recorded sometime back in 1990, easily recognizable as typical MASSACRE material, due to Kam Lee’s unique vocal delivery and the straight ahead simplistic riffing of Rick Rozz… Even though none of the songs reaches the high quality of their early classics of course, it’s still pretty enjoyable. So, I suppose the main reason why Earache wasn’t impressed by it must have been the band’s new rhythm section (Butch Gonzalas on bass and Joe Cangelosi on drums that replaced original members Terry Butler and Bill Andrews), which simply didn’t fit the band’s style at all. There’s a couple of upfront, almost funky type bass parts to be discovered that maybe would fit a band like ATHEIST, but certainly not a pure Death Metal institution such as MASSACRE. Apart from the six demo songs (‘Second Coming’, ‘Bleed To Death’, ‘Devouring Hour’, ‘By Reason Of Insanity’, ‘Mangled’ and ‘Psychopain Trip’) this CD also has a live version of ‘From Beyond’ on offer, recorded in Cleveland, Ohio on September 03, 1992. Despite my (and Earache’s) criticism, this CD is still another little piece of Death Metal history that deserves a place in your collection right next to the Iron Pegasus Records MASSACRE demo collection "Tyrants Of Death". www.hellsheadbangers.com