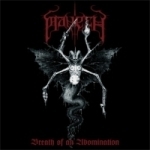 In my humble opinion the contemporary so called ‘Brutal Death’ genre is nothing but a joke. Those hyper triggered plastic drums, the Hardcore vocals, the break downs, the lame songwriting and the stupid "we have more beats per minute than you" attitude are ridiculous but definitely not brutal. Bands such as INCANTATION or DRAWN AND QUARTERED deliver sheer brutality and darkness for many, many years and still crush all those wanna be clowns. Fortunately there is a new wave of young bands to follow that tradition and one of them is MAVETH. By the way, ¾ of MAVETH is also active in CRYPTBORN, another band you should keep in mind when it comes to brutal Death Metal. Anyway, MAVETH (which means Death in Hebrew) already released its debut full-length, which is a hell of a god damned Death Metal monument, but we’re here to talk about the demo compilation. I always liked the idea of re-releasing demos and EPs as a compilation CD so I really appreciate that Nuclear Winter Records put the two furious demos from 2010 together on a CD. Especially because those demos are so fuckin’ awesome recordings. Both, the debut "Of Serpent And Shadow" and the successor "Impious Servant" are stunning examples how brutal Death Metal should sound. And it is astonishing how skilled this band already was during its demo phase. This is a lesson in violence and aggression, this is so unbelievable annihilating. Though it’s sheer power and anger you can hear every second how skilled the musicians are. The songwriting is superb and varied and guitar player and vocalist Christbutcher (formerly of DETHRONED and EXCOMMUNION) has the perfect voice for that kind of music: powerful, aggressive and blasphemous. The last song on this compilation is a cover of the INCANTATION classic ‘Immortal Cessation’ and it is without a doubt the best INCANTATION cover I’ve ever listened to. So what you are waiting for? If you have missed the original demo releases and / or if you prefer your Death Metal relentless brutal, sinister and dark then you should add "Breath Of An Abomination" to your collection. immediately!!! This is the real shit!!! www.maveth.com, www.facebook.com/maveth666, www.nuclearwinterrecords.com