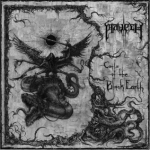 Well, I just praised the band’s demo compilation CD and now it’s time to talk about MAVETH’s first full-length recording. Fortunately not much has changed since the demo releases and that’s very positive, because how should you improve something that is almost perfect? "Coils Of The Black Earth" is a fucking masterpiece, no doubt about it. The album contains 10 infernal hymns full of darkness and anger. Those Finnish demons are able to combine great musicianship and awesome songwriting with pure inexorable and vicious brutality to create an utterly dark and obscure atmosphere. Fast blasting eruptions alternate with the heaviness of an almost congealed lava stream. The compositions are very sophisticated and well-structured. The morbid guitar work is amazing and some of the more melodic riffs add a blackish edge to the songs. Christbutchers vocals are tremendous, I already liked his powerful voice when he was in EXCOMMUNION and DETHRONED but his vocal performance on "Coils Of The Black Earth" is so fuckin’ over the top. He is definitely one of the greatest vocalists of the entire genre. The album sounds rather vital and dynamic and not that sterile and clinical like most of those modern sounding "brutal" Death Metal bands. Although I would call MAVETH an old school Death Metal band they did not sound like one of those ancient heroes such as POSSESSED, NIHILIST or SADISTIC INTENT. On the other hand they absolutely don’t sound like any of those modern wannabe clowns. This is just BRUTAL Death Metal, period!!! MAVETH is like a rabid Rottweiler with the power of a bulldozer. Enough said. This is superior brutal and darkened Death Metal at its best. Buy now!!! MAVETH rules supreme!!! www.facebook.com/maveth666, www.darkdescentrecords.com