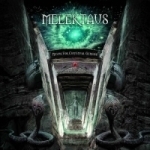 It was about goddamn time! After eight years Chilean Death Metallers MELEKTAUS who had risen from the ashes of underground cult DOMINUS XUL finally have wrapped up the follow up to 2004’s fabulous “Transcendence Through Ethereal Scourge” and every loyal supporter of the infernal trio will have reason to celebrate with the brand-new opus “Nexus For Continual Genesis” finally dropping. It’s dark, it’s savagely brutal, it sounds mighty heavy and crushing, it is fast as hell while retaining the ominous atmosphere its predecessor already sported so well. For those of you who have not stumbled about MELEKTAUS yet, think old NILE, INCANTATION, MORBID ANGEL combined with the frenzied, whirlwind drumming of classic CRYPTOPSY, devastating riffs and deep, intelligible growls roaring lyrics at you that are mostly inspired by Thelema or ancient cultures. Just like fellow Chileans MAGNANIMUS, MELEKTAUS deliver a sonic torrent of merciless chaos on “Nexus For Continual Genesis” yet with enough slower breaks (not breakdowns!) to retain comprehensible song structures. While I occasionally wished the drummer’s obvious fury would be tamed a little bit to let the riffs shine through more, songs like the rabid opener ‘From Hadid To Nuit’, ‘Convergence Into Protoconscience’ or the slower ‘Exalting The Primitive Bestial Shapes’ prove well that you can create utter violent Death Metal without being another SUFFOCATION clone or lame slam Death crap that blemishes the genre with insignificance and dullness. Quality extremity is what MELEKTAUS offer in spades and even though “Nexus For Continual Genesis” has been released via Australis Records, a label so far unbeknownst to me, I wish, I beg, I hope that this stunning record will be distributed well enough through mailorders worldwide to reach everyone fascinated by stunning, brutal and sinister Death Metal that perfectly balances technicality, impact and spirit. Check out a song here or here. Like the band at their facebook site and order this opus from www.australisrecords.com, e-mail: sales@australisrecords.com