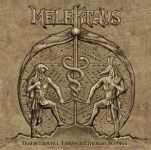 Listening to this album for the first time was quite a journey back in time for me. The sound and drum focused mix of “Transcendence Through Ethereal Scourge” from MELEKTAUS really made me think of old INCUBUS, especially “Beyond The Unknown” came to mind. When I started my research on the band and the album, I was neither surprised to find out that MELEKTAUS from Santiago de Chile are around for about twenty years already, born of the ashes of DOMINUS XUL after their break up at that time. Nor it is little surprise that we have to deal with an album here that was already put out in 2004 for the first time. And “Transcendence Through Ethereal Scourge” was re-released with good justice, because it should really please anyone into good old fashioned Death Metal with the spirit of 1990. And this does of course not automatically include technical finesse or a perfect production. Instead you’ll get fast and raw Death Metal with a slight, yet healthy touch of Thrash and a kick in the teeth. If that sounds quite typical Chilean to your ears, you’re not too wrong for sure. But you’ll also find some distinct hints on early North American Death as well, making “Transcendence Through Ethereal Scourge” great food for the blood hungry. So I guess this fine album from MELEKTAUS should please both some old geezers and friends of timeless Death Metal. For more information, go to www.facebook.com/melektausofficial or www.facebook.com/ibdc666 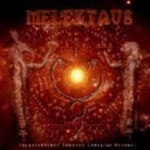 As soon as I had found out that Chile’s MELEKTAUS was still around after all those years of silence and that they had even finished their first full length album in the meantime, I expected nothing but a masterpiece! And those expectations were fullfilled completely! Forget about cheesy melodies, forget about the dogbarking style that became so popular lately, yeah even forget about the Scandinavian Death Metal style with all of its multifarious subgenres. This is the real deal! "Transcendence Through Ethereal Scourge" is 110% pure fuckin’ Death Metal in its most dark and intense manner! A highly impressive nine track offering of blasphemeous brutal old school Death Metal at its best! Musically obviously heavily influenced by the classic IMMOLATION / INCANTATION style and therefore in league with a new generation of similar rooted great hordes such as INFERNAL LEGION, DRAWN AND QUARTERED, SCENT OF DEATH or INCRUST (to name but a few) the album comes up with right into your face, yet very diversified arranged brutality. Lots of tempo changes, a raw but totally crushing old school sounding production and a sinister and very deep grunted vocal delivery. All of the songs off their "Promo 2002" luckily also made it onto the album (‘Transcendence Through Ethereal Scourge’, ‘Ecstasy In Heru-Ra-Ra-Ha’ and ‘The Primal Void In Nothingness’), so even those of you who aren’t familiar with their musical past won’t miss out on anything here. Lyrically MELEKTAUS come up with very complex topics that bands like CENTURIAN on one hand (Choronzon, Zar Zax etc.) and NILE / COFFIN TEXTS (Egytian mythology) on the other already adopted as well. So no cheap "Hail Satan" stuff here, but very in-depth and well researched writings. All in all to me definitely one of the best Death Metal albums in 2005 so far! For more info or ordering information contact the label at www.grotesquemusic.com