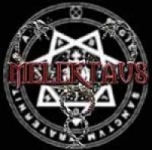 Another new name to the scene? No, not really, cause MELEKTAUS simply evolved out of the ashes of Chile’s DOMINUS XUL, who released one hell of a killer album entitled "The Primigeni Xul (I Condemned My Enemies)" on Picoroco Records (a detailed review on that is featured somewhere else in our review section). Even though the line-up has gone through drastic changes ever since (only bass player Francisco Cornejo is left from the old days), the musical path basically stayed the same and that is totally raw, uncompromising and brutal satanic Death Metal in the vein of early INCANTATION! This CD-R features three brandnew tracks that could easily have been featured on the DOMIUS XUL album, so if you enjoyed that little underground gem, you gotta make sure to get yourselves a copy of this promo as well. Don’t know if it’s officially on sale, but don’t hesitate to ask the band directly at this address: melek_taus666@hotmail.com An interview with the guys is already in the making, so watch out for that, to be published here soon as well!