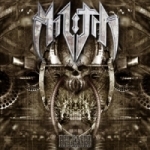 These guys from Texas are probably best known for their incredible rare 1986 vinyl 12″EP “The Sybling”, which was a self-financed, extremely limited release (just about 100 copies from what I’ve read) and which collectors all over the world already have paid ridiculous prices for (up to $3.000!!!). Even the bootleg 7″ of it sells for quite a bit of money by know, so it was really overdue that an official re-release was going to stop this madness. And “Released” is just that… and more. Ok, of course this ain’t a vinyl repress (yet the three songs off “The Sybeling” are part of it), but a collection of all (!) recordings that MILITIA have ever done throughout their unfortunately rather shortlived career. So, what you additionally get here is the three-song 1985 debut demo “Regiments Of Death”, the 1986 two-song affair “No Submission”, as well as a couple of bonus tracks. First of all there’s ‘Thrash To Destroy’, a song that partially was already recorded in the very early days of the band, but never really completed until most recently (another rhythm guitar track, a solo and vocals were added). Then there’s ‘Onslaught’, which is one of the first songs the band ever wrote (taken from a 1984 rehearsal), plus two very raw live tracks from 1986 (‘Objective: Termination’ and ‘Regiments Of Death’). Musically MILITIA was more or less a typical, yet highly talented 80s US Metal act, blessed with a vocalist that could easily hit the highest notes (Mike Soliz, who later resurfaced in ASSALANT and OBLIVION KNIGHT). On the instrumental side of things you could easily say that their early works had a lot of “Kill ‘Em All” era METALLICA riffing combined with classic IRON MAIDEN influences on offer, with a partly thrashy, partly progressive overtone to it. This highly explosive cocktail always got served with a lot of intense energy (best reflected in the two featured live tracks). Later on in their career (after the EP) MILITIA seem to have lost direction a bit, which resulted in the fact that they more and more drifted into the QUEENSRYCHE influenced Heavy / Power Metal direction, with a focus on a more melodic overall approach. But don’t get me wrong: no mater which period / style you personally may prefer, MILITIA always delivered their music with a lot of class (just like almost every Texas Metal act from that era… JUGGERNAUT, S.A. SLAYER, WATCH TOWER, HELSTAR etc. etc.), so it’s really a pity that they never ended up making a full length album. The packing of this compilation CD is exceptional as well and totally does justice to the music that’s included for sure! The cover is a great piece of art, based on the original band logo / EP cover, while the 24 pages fat booklet features historical liner notes from original bass player Robert Willingham, tons of great vintage pictures (mainly live shots), several gig flyers and a list of all (?) the shows the band had played between July 3, 1984 and August 21, 1986. So, if you would like to add another piece of Metal history to your collection, make sure to get yourself a copy of “Released”. www.myspace.com/militiatexas