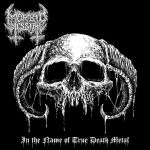 It’s just like good old Forrest Gump said: “Life is like a box of chocolates; you never know what you gonna get.“ And every once in a while you get a chocolate that really surprises you in a positive way. That’s exactly what happened to me when I got to know about the youngsters with that promising moniker. But don’t be afraid, there won’t be any further movie statements in this review; I promise! So, what are we talking about? Uhm, wait… ahh… right, Mexican Death Metal! What’s the deal with those hordes hailing from the country of Tequila and Tacos you might ask? That’s quite easy to explain. Far away from other countries except for their neighbour the US of A, they’ve always been cooking their very own hot sauce so to say. To speak clearly, Mexican bands always had their very own sound with slight hints of American and even maybe European influences. Listen to the ghoulish attacks from elder ones like PYPHOMGERTUM, R’LYEH, SHUB NIGGURATH and CENOTAPH and you get a glimpse into what I’m talking about. In contrast to the aforementioned we have acts like DENIAL, DARKCREED, RAVENOUS DEATH and for example REMAINS, that are more or less on the left hand path and follow the trails of their Scandinavian ancestors. As I already said, all of them with that certain ingredient, only Mexicans know about. What has that, maybe unnecessary, trivia to do with the to-be-reviewed newcomer MORBID MESSIAH? I don’t know because those four dudes and dudettes give a fuck about Mexican or Scandinavian influences! They don’t care about any trends in the current underground movement. They simply play Death Metal in its purest form. Raw, nasty and without any technical or occult nonsense at all. Right when the first spoken words on the short intro fade away you realize that this won’t be any cosy melodic Sunday afternoon entertainment, but pure slaughter! Throat punisher José Rivas obviously uses some acid to gargle with in the morning. I have to point out his performance as this is a really remarkable one. Despite his young age being in his early twenties, he is not only able to grunt in a very low and raw way, but also incorporates some fierce screams as well when there’s some need to it. Regardless to say that the rest of the pack isn’t worse by no means! The guitar play ranges from thrashy and buzzing shreds to more doom-laden and mid tempo riffing, not to forget about some morbid leads here and there. There’s another fascinating fact, which makes that band and recording even more special. The person that mauls the drum kit is a woman. And seriously, Anubis is second to none of her male colleagues. I simply like the way she uses the double bass and a certain cymbal I am not able to name, since I am not a musician. But I know it sounds ace, when it is deployed like in ‘Sacrificed For Worship‘. I would say, that this track and its follow-up ‘From Human To Fiend‘ are my favorites off that release as both contain all the trademarks of MORBID MESSIAH that I’ve already mentioned. If I’m not mistaken, “In The Name Of True Death Metal“ is the first sign of life, since their foundation in 2015. And with that in mind this is without any doubt a more than strong release, that others won’t even be able to acchieve in years. Well, this might sound a bit exaggerated to some, but it’s the overall package that counts to me. In roundabout 22 minutes you get six tracks plus intro of pure, relentless and honest Death Metal, wrapped in a bone dry production, garnished with a simple but perfectly matching artwork and logo drawing as well. To all you ghouls out there: if you’re in for a Death Metal quickie, or maybe suffering a short span attention; this one’s right for you! Built upon that already strong basement, that Guadalajara based four piece will have their say in the international Death Metal movement and I am already in eager anticipation for new tunes to be unleashed upon mankind. Don’t wait any longer and get in touch immediately to order your copy. Good news for lovers of the analog; Polish Godz Ov War Productions recently released “In The Name Of True Death Metal“ as a tape edition. So the agony of choice is all yours. More info at: www.facebook.com/morbidmessiahofficial, www.reverbnation.com/morbidmessiah