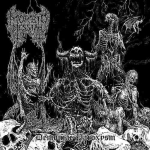 It was some months ago when I finally got my hands on Mexican MORBID MESSIAH’s debut EP, "In The Name Of True Death Metal", released independently back in 2016. At first I thought the name was a little pretentious, but no, it was not. The band proved me wrong right from the start with some really good Death Metal with that crusty old school vibe. Fast forward to October 22, 2018 and MORBID MESSIAH unleashes their debut album "Demoniac Paroxysm" through Spain’s finest Death Metal label, Memento Mori. This album shows that the band has been getting better at it. The performances are tighter and more focused. Jose’s vocal style is great: a deep and intense gurgle very reminiscent of Craig Pillard’s on INCANTATION’s debut album. The addition of Guillermo Lopez as the new bass player has added more low end to their music and it matches really good with Anubis Sandoval’s solid and interesting drum work. And last but definitely not least, Roberto Trejos’ excellent riffing which keeps shifting from fast tremolo to groovy palm mutes to heavy open riffs and everything in between including short but tasty leads. The songs range from slow and pounding to mid and fast paced. This variation makes the album flow perfectly across its 35 minutes. And besides the obvious USDM influences, I found some very welcomed Finnish and Swedish Death / Doom Metal touches too. And although "Demoniac Paroxysm" is not bringing anything new to the table, what really makes this album outstanding is the atmosphere. The overall production is crushing and, in my humble opinion, this is how Death Metal was meant to be played, recorded and consumed: no plastic drum samples, no clinical time alignment, no fake vocal FX, no digital stuff. Just a massive, raw and dark sound with a great mix and a lot of attitude. And "Demoniac Paroxysm" excels at all that! Any self respected Death Metal fan should go out and get this album now! I can guarantee you will dig this album as much as I did. Absolutely recommended! Go show some deserved support to the band here: www.facebook.com/morbidmessiahofficial. And get their album from their label here: www.memento-mori.es