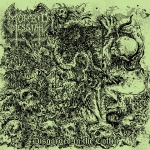 Oh, Mexican Death Metal. If you are a regular reader of Voices From The Darkside, you probably have heard / read before about acts as CENOTAPH, MORTUARY, TOXODETH, SHUB NIGGURATH and THE CHASM. But, what about MORBID MESSIAH? Well, they are not known as the aforementioned cult acts but are Mexican as well. Hailing from Guadalajara, Death Metal maniacs MORBID MESSIAH had unleashed their third production since its inception back in 2015. This new EP release consists of a six tracks, and is entitled “Disgorged In The Coffin.” It is available on CD and tape through Mexico’s Chaos Records. In its almost 22 minutes, MORBID MESSIAH offers an unrelenting piece of Death Metal in the way I do prefer the most: old school as fuck! Tracks as ‘Grinded For The Carnage,’ ‘Dungeon Of Vermin’ or ‘The Maniacal’ are good examples of what I’m pointing here. MORBID MESSIAH don’t waste time in long intros or keys; no way, they play fast, straightforward and brutal. The riffs are simple and effective, just as the drums and the general production is raw and fucking distorted. Their sound is closer to Swedish or Finish Death Metal. The drums are a bit too loud in the mixing, but this is not necessarily bad. Too bad the bass guitar is almost inaudible. As many Death Metal acts did before, MORBID MESSIAH introduced some dialogues or quotes taken from movies as ‘Final Destination’ or ‘The Dark Knight’. If you are not familiar with MORBID MESSIAH, “Disgorged In The Coffin” could be an excellent place to start knowing them. You can follow them at www.facebook.com/morbidmessiahofficial, label contact: www.facebook.com/chaosrecords.