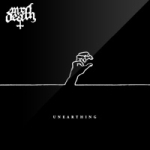 Haven’t heard a real Death Metal recording done at Sunlight Studio from a newer band in the Last couple of years, right!?! So don’t miss this one cause in terms of feeling and sound this four tracker is something like a real reanimation of some classical early 90s Death Metal sins. You already read about Juck and Stefan’s musical background in TREBLINKA and early TIAMAT, but making comparisions MR. DEATH sounds much heavier and classical Stockhom styled than their old youth recordings ever did. There’s not much of this Black Metal touch from their early days left either. Instead of that this is a real Death Metal crucifixion closer to classics like GRAVE, old GOD MACABRE or GODDIFIED, if you still hail those ones. There’s no modern vibes at all, but expect a truly dedicated dark touch with nice variations between heaviness and uptempo parts. Furthermore it comes with some real human touched death grunts that are still understandable. For my personal taste the guitars could have deserved a bit more of this fat classical “Swedish – Grunge” Death Metal distortion, but hey this is just a four track appetizer that raises bloody hunger for more!!! Fuck originality in this case MR DEATH keeps what the names promises. Maniacs into old Swedish elk shit should make sure to click at: www.myspace.com/misterdeathsweden or www.mrdeath.se