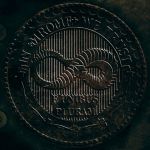 From the city of Andrychów in the voivodeship of Lesser Poland hails the band +MROME+. Even though they are a full band, they consider themselves as a studio project with a focus on creating music in accordance with lyrics and artwork and based on a DIY ethos. Of course that includes that their latest album “Leech Ghetto” is available only through their own label NRA and their site on bandcamp. But for a band that makes such ambitions clear, the music on “Leech Ghetto” is surprisingly free of over-ambitious or ambient ideas. Instead, +MROME+ play a kind of Metal that would have perfectly fitted the early to mid 1990s. Which means that their basic style is a groovy, PANTERA influenced kind of Thrash Metal with some added Alternative elements. One might do so, but not necessarily, since the result is not that interesting to my ears. Somehow I feel reminded of a mix of CHANNEL ZERO, especially the “Unsafe” album, and later LETHAL stuff like “Your Favorite God”. So, in case you never liked this Alternative / Groove Metal of that era, you should forget about “Leech Ghetto”. For those who had an open ear or even two in those times, +MROME+ might be of a certain interest, especially to feel reminded of the past times a quarter of a century ago. It was not all that bad for a Metalhead back then. Yet this doesn’t imply the fact that this kind of music appeals to me still. Asides of some moments, specifically in ‘The City Of Opax’ and the only Polish song ‘Twarz Niezawisla’, +MROME+ are not really my cup of tea. But this might come from the fact that I’m an old geezer who grew up with classic Metal styles. Nevertheless, +MROME+ are quite a competent band, so more open minded people or kids of the 1990s might check ’em out at https://mrome.bandcamp.com