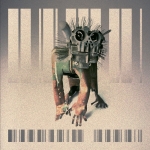 I think no critic likes to write a slating or bad critique, especially if the release is self-financed. But when it comes to the third album by +MROME+ I have to look for the good moments with a magnifying glass. Information is given that “Barbaric Values” is a “concept album based upon the moral and ethical conflict between socially imposed conditions and primordial nature of man.” So far so good and the cover looks interesting too. But musically the album is a bad example of everything that can be summed up under the term Modern Metal with elements of Deathcore, Nu Metal, Groove Metal and Industrial Metal. Already stopped reading? If not and you like the mentioned style, rest assured that it is presented in a rather lame version. Riffs, songwriting and sound are at the bottom of the scale. The usual deadline for a review is seven days and the only thing I remember from that time is the opening of the song ‘Balance Of Power’, which starts with an annoying Industrial / Techno intro, followed by some gimpy riffs, feeble vocals and the songwriting gets lost in nowhere. The same can be said for every song. Maybe I am to strict with my judgment, so everyone can form their own opinion by visiting https://mrome.bandcamp.com or https://soundcloud.com/user-796976146