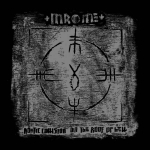 Not much is known of +MROME+ other than they consist of two members, Key V (vocals, guitars) and P (drums), and that they are strictly a studio project. Other than that, they’re a band who have no interest in promoting themselves as band members, but mainly to promote their music only, letting it stand on its own. And lyrically, are they praising God? Are they disappointed in God? Listen to the album and interpret it how you see fit. And maybe letting the music speak for itself instead of image, dozens of band photos, and band members speaking out about their life outside of the band is a good thing. Because it’s mainly the music that releases our souls from the chains that bind them. "Noetic Collision On The Roof Of Hell" begins with ‘Colors’, a mid-tempo track with a simple, yet head-nodding rhythm of guitars / drums and a distinctly relaxed (yes relaxed) style of Death Metal vocals. It won’t have you jumping out of your seat, but you might still get caught up in the swaying atmosphere it provides. ‘Crush The Moon’ is a more upbeat, thrashy deliverance of sound and vocals. ‘Migration Cult’ keeps the consistency moving forwards, leading into machine-gun guitars and warmaster growls. And in the center of the album… a DANZIG cover, ‘How The Gods Kill". What seems as a strange track to throw into the middle, actually sort of fits nicely into the album, gently resting among the cadavers of the songs surrounding it. ‘Trust’ is another straightforward tune that doesn’t necessarily bring anything new to the table, but doesn’t copy any style either. Mixed between the lead guitars in this (‘Generation Anthem’) and other tracks are separate guitars buzzing and needling their way alongside the main riffs, ‘Piss & Laugh’…What a great song title. The song itself isn’t as rambunctious as the title suggests, but it mopes and lingers along with its thudding drums and lumbering guitars. ‘Locust Follows Word’ is a Thrash fest of regurgitating guitars before slowing down to the mid-tempo Metal style that +MRONE+ seems to thrive in. But then the track kicks into high gear briefly a little over a minute into it. ‘Magister Figurae Morte’ actually has some proggy, funky, almost jazzy elements, but done in a Metal style. ‘The Arsonist’ ends the album on a high note, still not wavering from its initial path, and leaves the listener with a sense of closure. "Noetic Collision On The Roof Of Hell" isn’t going to change the face or Metal, or melt our ears off. But it does at least encompass a selection of songs that know exactly the direction the band is going… on THIS album. Next album may take the band in a completely different direction. But that’s something to look forward to for another day. Just relax and enjoy the sonics from this album as they were meant to be heard. You shouldn’t be disappointed. For more information, check out https://mrome.bandcamp.com, www.eeerecordings.net