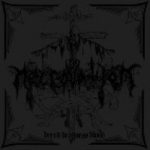 Since I heard NECROVATION for the first time I was totally impressed by them. The first contact I had with their music was with their “Chants Of Grim Death” 7″EP, later on I bought the “Curse Of The Subconscious” split 7″ together with the great Thrashers from CORRUPT and finally I got their “Ovations To Putrefaction” demotape a while later through trading. All in all I have to say that these releases are killers, nothing more nothing less. But what about this recording, NECROVATION’s first full-length recording? It’s a fact that many underground / demo bands can impress quite a lot with 3-4 song demotapes or EPs, recording 40 minutes of their own songs shows many bands in a complete different light. Many can’t convince anymore or prove that a full-length release is far too early for them! Luckily this wasn’t the case for NECROVATION as “Breed Deadness Blood” turned out to be a fuckin’ killer once more! They still stick to their putrid old school Death Metal with influences from KAAMOS, VERMINOUS and mostly REPUGNANT. As I don’t know what’s up with VERMINOUS and as KAAMOS and REPUGNANT ceased to be it’s great to have at least one band continuing this, in my point of view, totally untrendy brand of Death Metal. The album includes 9 songs and none of them was released before, no re-recording of an old demo- or EP-songs (huh? At least ‘Putrid Evocation’ already appeared on the “Ovations To Putrefaction” demo my dear Mr.Ehrmann – Frank). Don’t ask me why, but the interview which is on its way back to me sooner or later will surely answer that. I won’t pick out one or two of the best songs of this recording as I think that all of them are great. For me, “Breed Deadness Blood” could be the perfect follow-up of REPUGNANT’s “Epitome Of Darkness” album. I have to finish this review once more with the words from the label itself: “9 hymns for all the necromaniacs and worshippers of putrid, raw old school Death Metal.” That’s it! Before I forget it, this is the first CD-release from Blood Harvest Records, the vinyl version should be available end of March 2008! If possible order both, the LP and the CD, of this godly piece of old school Death Metal from www.bloodharvest.se immediately, haha! One of the best albums of the still very young year 2008! Don’t forget to check out the Voices pages the next couple of days as the NECROVATION interview should be online pretty soon!