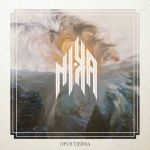 Doom Metal… Sludge Metal… whatever you want to call it, the foundations of Metal are not exactly in high speed riffs… no, it all started in that sound that BLACK SABBATH founded and then from it, many bands evolve. Yes, speed was definitely there for the added aggression… This is the second album from this band based in the USA and it is firmly rooted in the best early SABBATH tradition. Well, less bluesy more Rock’n’Roll. As a trio the band is very direct and front in-your-face. And yes, the Heavy Rock sound is present there, with an obvious more modern production, but sounding without doubt as if they were in the early 70s. I like the vocals, which are good melodic and solid for the style, nothing out of the ordinary, yet effective for what the music requires. And that is basically it, the band keeps it simple and direct, they are not looking to re-invent the wheel and neither they need it. They just play that kind of Metal, that although might be labeled as Doom, it is not that slow and neither is boring, and has that old tough Rock’n’Roll vibe to it. Some songs tend to have a similar vibe, which I suppose is something normal in the style. At times they do have more heavier moments that are near the early CANDLEMASS sound and those were the ones I enjoyed the most. But then some others are more in the more traditional style… Stoner Metal also comes to my mind, yet I am not sure if that is the right way to call them. Ah, to hell with labels that say nothing. Fans of the early sounds of Metal will definitely like this one. www.facebook.com/nixaband, www.war-anthem.de