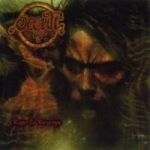 It’s really sad to see that Holland’s OCCULT quite obviously still have to suffer from constantly dealing with the wrong record labels… Their 1994 debut “Prepare To Meet Thy Doom” as well as the 1996 follow-up “The Enemy Within” both came out on the small and rather inexperienced Foundation 2000 label (probably most famous for the release of THE GATHERING’s debut “Always”), who didn’t really had the (financial) power to promote the band in a proper way. Things could’ve easily changed for the better a couple years later, when Germany’s Massacre Records picked up the band to release their third album “Of Flesh And Blood” in 1999. But for reasons beyond my knowledge they unfortunately also never really gave the band the necessary support that OCCULT would’ve needed in order to gain a bigger attention. So, instead of letting them play out live as often as possible (where the band’s old school inspired Thrash sound still works best!), all they basically did was releasing the record and then let it die (ok, to remain fair here – OCCULT got one tour opportunity, opening the X-Mas festivals alongside MORBID ANGEL, GORGOROTH, GOD DETHRONED, AMON AMARTH and KRISIUN). No surprise that this business relation didn’t last too long either… Line-up problems became another setback in the band’s career then, but Maurice and the gang even managed to survive those and recently returned to the scene with their fourth full-length “Rage To Revenge”, the band’s first release for Belgium’s Painkiller Records. I’m not quite sure whether or not this business move will really increase their chances on the market, but OCCULT obviously don’t give a fuck at all, stick to their guns and still do what they do best: playing their intense SLAYER-esque Thrash Metal with hints of Death Metal and (probably for the last time, as Rachel left for SINISTER) their already quite famous doubled lead vocal delivery. OCCULT have neither wimped out throughout the years, nor jumped on any trendy bandwaggon in order to become more famous (they even stopped wearing corpsepaint at a time when everybody else was doing it), so all power to them! If you still freak out on experienced songwriting, intense killer riffing and an overall brutal Thrash assault, without any neo aggressive influences, you can still pick this up without hesitation, as the wellknown slogan “Thrash ‘Till Death!” once more sums this up best! Label contact: www.painkiller-records.com