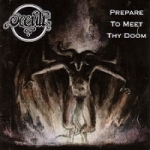 Honestly spoken I was never interested in the Dutch legend OCCULT, but this reissue of their ’93 demo, the debut album "Prepare To Meet Thy Doom" and "The Enemy Within", both originally released on the meanwhile deceased Foundation 2000 label, disabused me. The band was founded in 1990 by ex-BESTIAL SUMMONING (another mighty Dutch legend, check out the reissue of their material on Warhammer Records!) drummer Maurice Swinkels and create a unique mixture of Death, Thrash and Black Metal. While the ’94 debut album suffered from the slightly weak vocals, which were a result of a serious throat infection as the liner notes tell us, the 2nd CD containing the ’93 demo as well as the 1996 "The Enemy Within" album is simply classic!!! The production by Harris Johns and Martin Erfurt is timeless, absolutely perfect and easily meets today’s standards. The songs offer diversified Death / Thrash with individual sounding, aggressive vocals reminding me of old Thrash legends like DESTRUCTION, SODOM as well as contemporary Black / Thrash hordes like DESTROYER 666 or GOSPEL OF THE HORNS. In addition to that there are SINISTER-singer Rachel Heyser’s brutal growls, which create another original effect. "The Enemy Within" is a must-have!!! The ’93 studio demo is great as well and shows how Maurice would have sounded on "Prepare To Meet Thy Doom", if his voice would have been healthy. The four songs still have a stronger Black Metal feeling than the later OCCULT material, but there are those cool Thrash-parts hinting at the band’s further development. Soundwise even the demo is excellent and personally I like it better than the official debut album. To make a long story short, if you do not already own OCCULT’s early efforts, you have to get this re-release!!! Besides excellent music you will get a huge booklet including band biography, liner notes by Maurice, song lyrics and a lot of exclusive photos, so you definitely will not be disappointed. Also watch out for "Rage To Revenge", OCCULT’s fourth official release! Ok, for more information check out www.painkiller-records.com, if their website is still down try it again later.