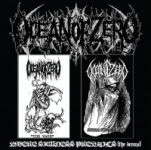 This release is a compilation of the band’s two short but sharp demos "The Wake" (2010) and "Shun The Light" (2011). Both efforts sound slightly different from each other but both have a rather American sound. OCEAN OF ZERO hails from Australia and was formed in 2009, but that’s were the info ends. "The Wake" reminded of a faster JUNGLE ROT, a slower RIPPING CORPSE and even a slower version of early CRYPTOPSY. Also the production is rough and grindy. Early GORGUTS came to mind as well because of some uncommon elements in the songwriting. The three tracks ‘Realm Of The Deceased’, ‘Into The Obscure’ and ‘Inverted Sect’ are enjoyable, smoothly executed and sound fresh without being original. Maybe some riffs, some leads, some drumparts or the mix of them. I can’t really pinpoint, but something gives an obscure and catchy hook to the Death / Thrash these gents unleash. "Shun The Light" is a bit slower and shows the bands has improved in they way the leads are incorporated but stayed within their region. This time, it sounds even more that Scott Burns produced this demo. This is no complain, but listen to the riffs and I’m sure it will remind you of older GORGUTS, PESTILENCE, MASSACRE, DEATH and ATROCITY. Apart from first track ‘Shun The Light’ which is a possessed vocaltrip, it’s again very enjoyable stuff. Everyone does a great job on both efforts, but a big applaud goes to the excellent grunts and intense drumming. I prefer "The Wake" because of the speed and energy and you better decide for yourself if this can satisfy your 90s US Metal hunger. For band contact, write to: bloodynoize@yahoo.com. Label contact: www.obscuredomain.com