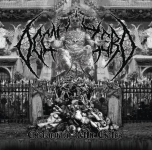 Hailing from Down Under, OCEAN OF ZERO is not what you usually expect when it comes to Aussie Metal. That small continent is famous for uncompromising Black / Thrash / War Metal like DESTRÖYER 666 and GOSPEL OF THE HORNS on the one hand and such obscure and even weird stuff like ALCHEMIST, CRUCIFORM, DISEMBOWELMENT or even BLOOD DUSTER on the other, but when it comes to straight forward in-your-face thrashy Death Metal, that small continent is nearly untouched like a virgin. At least I am not that familiar with a bigger Australian Death Metal scene. But, I really do hope that’s gonna change hence the debut of that Queensland located young horde. They already released two demos in 2010 and 2011 (which both had been re-released on a compilation through Obscure Domain Productions in 2012 by the way) as first signs of life, but let’s go back to the present. After a short Intro, the title track ‘Graveyard At The Gates’ breaks loose like there’s no tomorrow and one thing’s for sure with the first notes; OCEAN OF ZERO are neither another obscure occult clone, nor are they copycats of the left hand path. And even if I love Scandinavian Death Metal to the bone, it is really refreshing to hear that there are bands that draw their influences from other, sometimes way too underrated countries, when it comes to the deadliest form of Metal. Even though there are some weird guitar leads / harmonies, that slightly remind of CADAVER’s morbid "Hallucinating Anxiety", this 30min bullet ride shows many references to the hey-days of European Death Metal, especially from France and Germany. "Graveyard At The Gates" provides the audience with a very guitar-oriented Death Metal quite similar to acts like MERCYLESS and LOUDBLAST. And just like the first mentioned often incorporated Thrash elements, so do OCEAN OF ZERO to create their very own special and lethal mixture. This young entity is able to comprise the best elements, whether it’s neck-breaking up-tempo aggression, mid-paced heaviness an angry barking dog on vocals and all over this musical madness you’ll get this insane leads! Fuckin’ love it! A track like ‘Specters Of Insanity’ is a good proof for a perfect skull splitter as it contains all the necessary ingredients to forge weapons of deadly steel. I even dare to say that corpses like IMMORTALIS and TORCHURE (GER) have had an subliminal impact on that mean fucker, too. But as always, that’s just what comes to my sick head and may not fit your point of view. Listen to ‘Shun The Light Part II’ and the guitar riffs and drum patterns may lead you to another European country that once held the most sick and bizarre creations instore; Austria with its uncrowned kings of bad taste, PUNGENT STENCH. You don’t agree? Well, I don’t care. Even if nothing of my spawned illusions may cope with your impressions on that release, "Graveyard At The Gates" is a versatile and very strong debut of a young band that has the ability to establish themselves in the underground and beyond. My conclusion: A very entertaining, perfectly hand-crafted and captivating chunk of fresh meat, being worth your money and attention. For those complaining about the short playing time: use the "repeat" button; problem solved. Still interested headbangers (and the rest as well!!) should get in touch at: bloodynoize@yahoo.com, www.obscuredomain.com