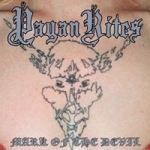 Devil Lee Rot and his bunch of old school Black / Heavy Metal are back with a new album and it is definitely the band’s best produced release ever, although it does not bring any new elements into PAGAN RITES approved mixture of early MAYHEM, VENOM and catchy Heavy Metal parts. With the unique sounding vocals of the hellish Grandmaster of Evil – Devil Lee Rot, the NIFELHEIM bros and sadistic Sado Harri’s musical assistance one can expect nothing but an entertaining, straight album containing re-done demo tracks like ‘Pagan Rites’, ‘Return To The Lake Of Fire’ as well as more than a handful of new material that is even better than the old shit. Like Devil Lee Rot’s other band AUTOPSY TORMENT, PAGAN RITES create easily accessible, bang-compatible music that is at his best, when you are either drunk or driving on the motorway or both, hahaha! This album does not change the Metal world, but it is good, powerful, rocking entertainment from the netherealms of hell!!! Get this album, some friends, some beer and have the devil’s definition of fun… For additional info, MP3 etc visit the Primitive Art Records website www.primitiveartrecords.com and if you are interested in a good overview on PAGAN RITES previous unholy doings surf to www.iron-pegasus.com, because the German label just recently released an excellent 70+ minutes PAGAN RITES comp on CD called “Rites Of The Pagan Warriors”, so check this out!