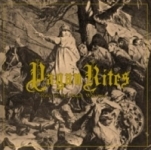 Thanx to Costa at Iron Pegasus Records all those of you who prefer the CD over vinyl (or who are too lazy to do tapetrading) will also get a chance now to check out the rather legendary Swedish act PAGAN RITES. This CD ain’t a real album of the Swedes, but a compilation of various different releases of Devil Lee Rot and the gang. Starting off with four (out of originally seven) tracks from their “Bloodlust And Devastation” mini LP, two tracks from the self-titled 7″ EP, six demo tracks from their 1992 and 1993 tapes “Pagan Rites” and “Frost”, three songs that are of unknown origin (according to the CD’s liner notes) and a previously unreleased track, entitled ‘Moonfog’. So, what you get here is a very cool overview about the band’s career so far (including some of the original vinyl noises in some of the tracks, as it was obviously directly copied from an old vinyl version rather than a mastertape). PAGAN RITES is a very raw, totally old school Black / Thrash act, obviously heavily influenced by old VENOM and MAYHEM, musically always straight forward, very basic and simple, completely uncompromising, dirty and ugly as hell. So, it’s no real surprise to see the NIFELHEIM twins Tyrant and Hellbutcher resurface in the line-up these days. Now my only remaining wish for the near future is that PAGAN RITES finally gets the chance to record some of their material with a proper studio budget. But as that will probably never happen anyway, you should at least make sure to go for this here instead. www.iron-pegasus.com