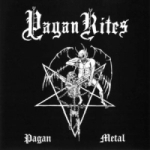 What we’ve got here is a collection of tracks that is going to be released in different formats later this year, as split-singles or 7″es by labels as Hell’s Headbangers and Iron Pegasus, as well as a complete collection on CD by Atolinga Records. If you’re familiar with this act around the infamous Devil Lee Rot (dear kids: don’t use pseudonyms such as this at home if you should ever feel the need to be taken seriously) you probably know that their definition of Pagan Metal is quite different from what this term stands for nowadays. So don’t expect acoustic interludes or the excessive use of mouthharps, flutes ‘n fiddles, but primitive and simple blackened Thrash that is the very definition of old school. To me this kind of retro-music has always been a kind of a double-edged sword, since the legendary acts that all these bands relate to, were trying to create the most violent and dark music they could imagine back in their days. That’s what makes all these classic albums the monoliths they truly are and for me it’s simply not possible to recreate that special feeling nowadays by using the same methods and song-writing-formulas. Instead the result to me always has an unpleasant taste of staleness and false nostalgia, since this ‘Those were the days’-attitude takes away too much of the original intention of this music which was to praise the morbid and occult and not delivering the soundtrack to happy teenage-memories. Well, after all that’s just me and if you understood or even shared the euphoria around the last DARKTHRONE-record you might just as well check this one out. At least these guys seem to be really dedicated, in contrary to all the GEHENNAH’s, INFERNÖ’s or NOCTURNAL BREED’s back in the nineties who were straight out parody. Up the irons!?!