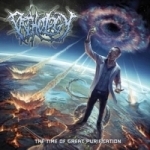 Anyone wants an example of a hard working, no frills and bullshit Death Metal band? Raise your horns up for San Diego 4 piece PATHOLOGY as this is their 6th album in six years and what a fuckin’ gut ripping, skull bashing, leg breaking, eye squashing brutal slamfest that is! This shit should be played in anger management classes or something, coz after 30 minutes of brutal slamming Death Metal all those patients will be lying on the floor breathless and dead. No slow songs or ballads here, just full-on heavy as elephant’s shit US style brutality in the vein of early DYING FETUS, DEVOURMENT, DISGORGE and the likes. I have to admit, I’m not the biggest fan of this style as it usually tends to get very repetitive after a while, but PATHOLOGY somehow manage to make their 2,5 minute assaults extremely heavy, but also refreshingly infectious and varied. In fact, I was hooked by them after seeing the band live supporting OBITUARY and GRAVE, where they performed amazingly tight and blistering show. The production of "The Time Of Great Purification" is full, fat and unexpectedly organic, soundwise it reminds me of "Evisceration Plague" by CANNIBAL CORPSE. Killer grooves, bowel loosening breakdowns, deep guttural toilet cousin growls and catchy riffs which don’t stray away into the overly technical self-wankery territory keep my attention throughout the whole album. If you gonna invest in some brain melting, straight forward slamming brutality this year, make sure to check out this PATHOLOGY album, they have some exciting packages with posters and t-shirts along the actual CD, which is going to be released worldwide on September 25th. www.pathologymusic.com, www.victoryrecords.com