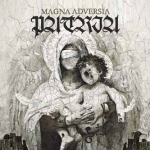 "Magna Adversia" is already the sixth full-length album by this prolific southern Brazilian band. But apart from prolific, here’s a duo that counts on people once involved with several bands in Brazil, plus the session members and each of their own references, and still sticks to the 90s Black Metal soundscape in spite of all the varied set they put on with their countless previous bands. The album starts in a rather SATYRICON – ish fashion but shortly unfolds a wider array of riffs that mostly dwell on the third generation of Nordic Black Metal bands, yet maintains the constant presence of vocals so common to the South American Metal with very few experimentation in long instrumental passages. The acoustic guitar bits are absolutely enthralling, and the drumming is flawless, but I did feel like the vocals steal part of the grandeur of several instrumental parts. The references here are many though, and as the aggressively cold atmosphere goes on, hints of Doom, Death Metal, and even very inusitate Progressive Rock (not Progressive Metal!) influences pop up here and there to add some contrast to what could easily fall into the pile of obvious Black Metal music. PATRIA doesn’t seem to seek a new blend of music, but rather hone their Black Metal within a niche that has become more and more absent after the advent of the esoteric trend. There’s a cleaner approach to their songs in comparison to their previous albums. Call it evolution or not, but it did work pretty well in their case since there are plenty of elements that just need to show up. Even with drum tones that are not my taste – being rather flat to a certain extent – I do find everything was carefully measured and the outcome is way above many of the bands insisting in what most Black Metal fans would deem outdated. I had seen their promotional music video and was not so impressed with the song, but the listening of the whole album just changed my opinion in regards to the album. Here’s an album really well balanced between atmosphere and aggression, with several minor details that add up to the album as one of the greatest releases Brazil has delivered in years. Check PATRIA on www.facebook.com/patriaofficial, www.soulsellerrecords.com