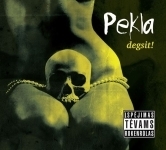 PEKLA is a new Lithuanian band that stands out from the usual crop of young bands with their seasoned vocalist Antanas Dailide who has been doing his earnest Udo Dirkschneider impersonation and delivering a hell heated performances around local stages. Their debut album "Degsit" ("You Will Burn") contains 10 tracks of high octane Heavy Speed Metal punctuated with mid-tempo catchy melodic choruses, delivered in a sing-a-long fashion and those are hit and miss for me personally. Sometimes they work, like on tracks ‘Velines’ or ‘Išdurk Akis’ and sometimes they fall miserably cutting into the track’s groove and effectively killing it like on ‘Dievo Vardu’. On the whole PEKLA take a simple and fun approach, trying to deliver bullshit free, energetic tracks that work best in live setting, that is if you like high pitched vocals and some Hard Rock styled choruses mixed with Speed Metal. Each track on the album is quite unique, there’s a plenty of variation, even the odd ballad ‘Niekas Nelaukia’ (‘No One Is Waiting’) which really delivers, the production is well balanced and punchy, so bearing in mind that "Degsit" is only their debut album, PEKLA made a strong debut statement and I’m quite curious to find out how they’ll develop in the future. More information at www.facebook.com/peklaa, http://pekla.bandcamp.com, www.inferna-profundus.net