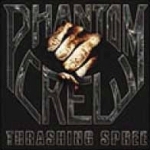 PHANTOM CREW originally was a Pennsylvania based act that had been around from 1989 until 2000 after having issued five demos but no album if I’m correct. Apparently they were calling themselves a Power / Thrash act… Well as I don’t like approximations, this band (despite incorporating a lot of Bay Area influences in their early material) was a Power / Speed Metal act, but had nothing in common with Thrash. Early PHANTOM CREW could be described as a mixture between LÄÄZ ROCKIT, DEFIANCE and TESTAMENT, the latter having been incontestably their biggest influence as at times you wouldn’t notice the difference between the two acts, except for the fact that PHANTOM CREW as a whole was able to pen much more memorable / better tunes than the overpraised / mediocre Bay Area act. No shit! At times it’s clear that PHANTOM CREW deserved much more than staying a demo act as ‘Take A Look’, ‘R.T.D.’ or ‘All Saints Day’ (a tune that easily could have been on a DEFIANCE album and would have been DEFIANCE’s best song unlike their lame stuff for the most part!) prove. They also had their lame moments like on ‘Charlie’ (a speed for the sake of speed tune with some awful backing vocals stamped on it), ‘Sidewalk Shredd’ (a boring mid paced tune) and a few more from the early days. Still the fun stops when the ’94 era starts as the stuff sounded way less involved and the band was just another Power / Heavy Metal act à la OVERKILL and the likes with no hooks incorporated in their tunes, staccato riffs even finding a place in some parts of the material… uninteresting as far as I’m concerned. Also an Hardcore influence could be found at this point, particularly evident through the vocal delivery in the ’97 tune ‘Numb’ and some others (‘Run With Flies’ being another flagrant example – AWFUL!) from the last era of existence of PHANTOM CREW. Unimpressive to say the least. This said PHANTOM CREW were definitely a way better band than the likes of FAITH OR FEAR, ABACINATOR or ANVIL BITCH from the same state and could have marked some points if the chance would have been given to this act. But as everybody remembers, the scene was alreeady oversaturated when this band started! Sad. www.phantomcrewthrash.com, www.marquee.com.br