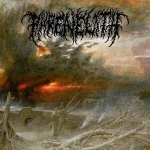 PHRENELITH is a Death Metal band from Denmark that has been creating a name. After a few demos and EPs, this is their debut album, and it’s very old school and incredibly heavy, reminding me of the golden years of underground Death Metal that were so present in Finland but also in Scandinavia, the Netherlands and so on. It reminds me a lot of those old releases by bands like CRYPT OF KERBEROS, ADRAMELECH, DEMIGOD, CONVULSE and the likes… but also American bands like INCANTATION and IMMOLATION. Very guttural, inhumanly low vocals with an old style production and tortuously downtuned guitars playing great deathly riffs are accompanied by drums that seem to have a serious grudge against you. The vocals sound like the grating of giant rusted iron slabs. It’s all so heavy it bludgeons your brain. The music is usually very mid-tempo, with rare diversions into faster areas (‘Deluge Of Ashes’), and more often descending into Doom / Death, like for instance in the instrumental title track, that ends with a grisly sounding acoustic guitar. Right after that you are treated back into a dragging holocaust that sounds like being pummeled to death by a hailstorm of metal balls until you are mashed into a pulp… hidden under a shitload of metal balls. ‘Defleshed In Ecstasy’ even has a jab at playing a solo, something they might have gone for more often, but that’s not really their thing I guess. PHRENELITH rather create an intense and compact behemoth of sound. The closing track, the seven-minute ‘Channeling A Seismic Eruption’ is like walking through a raging storm and it’s beautifully crafted, a crescendo of heaviness that will stop at nothing. If you are an old school Deathster you will immensely enjoy this tour into the purest and most vicious times when Death Metal was about ripping your head out from your shoulders instead of technicalities and fusions. A remarkable, massive and monstrous album in this day and age. To be brutalized the old school way, head to www.facebook.com/phrenelith, www.darkdescentrecords.com