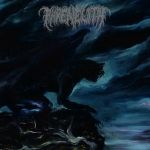 “Chimaera” is the second full length album from the Danish Death Metal band PHRENELITH. These guys are active since 2013 and have released also five demos, two EPs and one split 7″. “Chimaera” was released in December 2021 both on CD and digital format by the Greek label Nuclear Winter Records. Here we have a good example of the the New Wave Of Old School Death Metal, all compressed in seven tracks for almost 32 minutes of music. The line-up is formed by members of the acclaimed Danish band UNDERGANG, but the style of PHRENELITH can’t count on the ultra guttural growlings and puke-filled screamings in the vein of DEMILICH, IMPETIGO and early CARCASS. Here the vocals are typical Death Metal growlings, not particularly sick and brutal. Musically the link between UNDERGANG and PHRENELITH is evident: a mixture of catchy old school Death Metal riffs, blasting accelerations and doomy slowdowns. The double bass is solid with some groovy tank-style slow parts à la BOLT THROWER. There are some blastbeats too, not very fast, but well played. The production is very professional, but it doesn’t lack in terms of rotteness and claustrophobia especially in the Doom parts. Imagine a strong mixture of early GRAVE, DEAD CONGREGATION and INCANTATION. In conclusion, this is a good album, that could have been better with an obscurer atmosphere. More information you will find at: www.facebook.com/phrenelith, www.nuclearwinterrecords.com