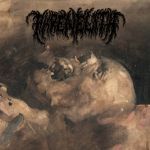 “Ornamented Dead Eyes” is the last offering by Copenhagen based Death evokers PHRENELITH, one of the best Death Metal acts nowadays (“Desolate Endscape”, their debut album, was listed in the best 10 releases of 2017 by the Voices staff and readers). Released last year by Night Shroud Records as a 7”, this EP contains only 2 tracks. The first one is ‘Triumphing Blight’, a five minutes track of Metal of Death in its purest form. After a short intro, it kicks off with some vicious blast beat that transits into some mid-paced drum patterns still using the same previous riff. Reaching the second minute it is possible to hear David Torturdød’s deep inhuman growls. The riffing here is varied and the entire track is adorned with some great solos on guitars here and there. The drum patterns vary from fast to slower passages. In my humble opinion, the second track is better than the first (don’t get me wrong, both are great). Title? ‘Ornamented Dead Eyes’. The work on guitars is fucking effective and brutal (reaching the end of this track, it sounds as a Doom / Death composition in the same league as acts like DISEMBOWELMENT / INVERLOCH, DUSK or SPECTRAL VOICE). Remarkable is the atmosphere achieved and the great work on drums. It is a bit longer than the previous one, reaching almost 6 minutes. Sometimes some EPs seems to be non-essential stuff because of its short length but this is not the case. Die-hard old school Death Metal fans must get it. Stay tuned about the band at www.facebook.com/phrenelith. Get in touch directly with the label for your copy at https://night-shroud.blogspot.com.