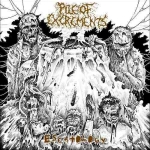 Would these guys take it the hard way if I decided to write that this album is shit? Well, I don’t know, and I will never know, because it isn’t. It’s surprisingly good. I was half expecting a rotten Grindcore band, but this debut actually consists in some great Death / Thrash Metal. I remember long ago I used to enjoy EXHUMED because of how thrashy their Grind sounded. This is different! It’s even more melodic, meaning Rock’n’Roll melody, mixed with aggressive Death Metal (hear how Rock their title track sounds, for example). Their amazingly proficient drummer plays in a lot of bands, including Death / Gore mongers NECROVOROUS, but also new Speed / Heavy Metal sensations SACRAL RAGE, so you see these are Metalheads with a wide range in taste. Here he is called Shit Eater, while the other members are Pungent Hemorrhoid and Necropervert. There’s a lot of humour, such as in the traditional movie clip outros or intros, and in their version of ‘La Cucaracha’, here with the name ‘Buttfucked By Giant Cockroach’. So they remind me a lot of bands like AUTOPSY (who had their "Shitfun" already decades ago) and PUNGENT STENCH, but they have their own sound… surprisingly, they are quite a discovery. This trio manages to create a monument of aggressively killer Death Metal, with a sometimes almost superhuman pace such as in ‘Leper Orgy’ or ‘Cult Of The Unibrow’, together with a profusion of great riffs, and drumming that goes from Crust to technical Heavy to fucking hyperspeed. And even the vocals of Necropervert are truly remarkable, with a deep guttural resonance that is much impressive. Tracks like ‘Bowel Rampage’ or ‘Silent But Deadly’ are great pieces of music, in spite of their shitty thematics. So I do recommend you to check the following links and to learn more about this great work! www.facebook.com/pileofexcrements, www.memento-mori.es