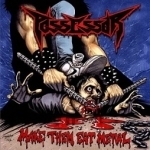 After their highly acclaimed debut "City Built With Skulls" and a successful trip to Europe in order to participate at the Metal Assault festival POSSESSOR are back with a brand new EP. It is entitled "Make Them Eat Metal" and comes up with a suitable, cool cliche laden and poser killing cover artwork which roughly reminds me on ANTHRAX’s "Fistful Of Metal". Four tracks are featured on this quite short mini album which includes a cover of Florida’s legend NASTY SAVAGE. It’s noticeable that these youngsters slightly increased the speed of their tunes. All sounds a little bit more violent and more relentless than before. Those who attended a festival show already got a taste of their new efforts. An eruption of neckbreaking Speed Metal mayhem which will crush all posers and kick their remains into the gutter. Even the overall sound offers more pace, all trademarks of the band like the precise riffing and wild leads are still there. And singer Robbie is like usual on the edge of madness with his wild performance and high pitched screams. There’s absolutely no loss of quality in the songwriting department – no! These guys even got stronger than before! The cover version of ‘Metal Knights’ is also well done. A little bit faster than the original but this gives the track his own flair and identity which is an important factor when performing a song from another band – at least in my opionion. So if you enjoyed the full length album then there’s no excuse not to get hold of a copy of this excellent EP. It will for sure satisfy your needs of a metallic overdose. I am already keen on the upcoming album by these Thrash’n’Speed Metal maniacs. www.slaneyrecords.com, www.facebook.com/possessormetal.