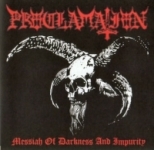 Proclamation from Madrid didn’t need much time to release their second full length, again co-produced between Ross Bay Cult and Nuclear War Now Productions, two perfect labels for a band in their style. I must say for me they are without any doubt the best reference nowadays when thinking about a bastard son of BLASPHEMY, especially when you don’t want to hear a bad copy or something with any personal contribution. With all this, I didn’t expect any big musical evolution on “Messiah Of Darkness And Impurity”, because of the style of the band, but even like that they surprised me with a better achieved sound, which comes headed by the production of the guitars. Even though still very raw and chaotic, making a wall of sound, they achieved to be more precise and sharped, and furthermore you can even hear the bass on them, which seemed quite impossible on this kind of recordings, and which adds a lot more of heaviness to the sound. Apart from the production, those who didn’t like their previous work probably won’t like this one either, and those who loved “Advent Of The Black Omen” shouldn’t miss this new offering. Ten tracks of dense, putric, chaotic and blasphemous Black / Death Metal (or War Metal, as it is used to be named). Some riffs reminded me a bit of Archgoat, something I hadn’t noticed on their first album, and there are some brief Brasilian Thrash / Death influences, like in the beginning of ‘Sepulchral Carnage’ or from old school Death Metal in ‘Tyrants From Desolation’. What I don’t like at all is the sound of the drums, not only because of the low volume of some parts but also because of how they sound, especially the double bass, which lacks in strength, and the cymbals, which are totally out of substance, they fade out inmediately. I think I’ve said enough, everybody will have a clear idea of what to expect, but it’s a kind of album that is addressed to those who follow the true underground cult of Black / Death Metal in the old way. Worship him! www.nwnprod.com