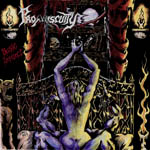 I did the review for Israel’s own PROMISCUITY’s debut demo tape "Infernal Rock’n’Roll" for VFTD back in 2011. A demo tape full of Punk-ish Speed Metal infused with a lethal dose of Black Metal. And here we are in 2013, with their second release, the self-financed "Basic Instinct" EP. And there are no drastic changes in their style. Werewolf (bass) and Butcher (guitars and vocals) are still the masterminds behind the band, with session member Steel (of SONNE ADAM) handling the drums. 15 minutes of Speed / Black Metal rooted deeply into the early 80s. The EP includes 3 new songs and a really good cover version of CELTIC FROST’s ‘Into The Crypt Of Rays’. Although the cover version sounds really similar to 2 of their originals, both ‘The Beauty And The Bitch’ and ‘Pedophile’ offer a classic MOTÖRHEAD meets HELLHAMMER mid-paced outburst, with effective (even groovy) riffs. The closer, ‘Maniac’s Blues’, is the only different song, with a slow-paced grind that crosses over to Doom Metal territory. Oddly enough, it has the most interesting moments when compared to the other material. Production wise, the sound is raw and in your face. Nothing fancy or over-produced. Yet, every instrument is perfectly distinguishable in the mix. Heavy bass guitar tone, buzz saw guitars and pounding drums. The execution of each instrument is rather simplistic, but it fits their style just right. And the gnarly vocals round up the whole product. It seems these guys stick to their guns when it comes down to the music they want to play. The influences are too obvious, but they are not copy cats either. I don’t know if this fact works with the band or against it. I mean, the EP runs for 15 minutes. There is no way you can get bored listening to it because it’s pretty good stuff. But if these guys are planning to release and album, in my humble opinion, some variation would help them a lot. Overall, another nice release of their raw and groovy "Infernal Rock’n’Roll". HELLHAMMER, CELTIC FROST and MOTÖRHEAD freaks should order this NOW! Band contact and sound samples at: www.promiscuity-band.com, www.facebook.com/promiscuity.band, www.infernalrocknroll.bandcamp.com