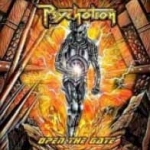 PSYCHOTRON? MEGADETH fans, eh? Cool name anyway. These German Thrashers promisingly start with a cool intro. Unfortunately floating into the first song is fucked up by a pause that doesn’t belong there. The producer’s fault? Cool Thrash song, aggressive vocals. But already the first song reveals their massive weakness: the clean vocals. They sound utterly German and, even worse: completely provincial. Slight timing problems concerning those vocals, too. The compositions are solid at least (‘The Ticket [To Insanity]’), partly even truly good – sometimes with slight Power Metal influences (‘Beauty Of Sadness’) and they have quite some drive. The band likes to play with dynamics as well (good!) and the musicians are relatively competent – okay, sometimes I wonder if this or that was truly tight and the instrumental at the end of the record reveals a little as well. The production sounds professional. If the band seriously works on the clean vocals or completely leaves them I can see a future for PSYCHOTRON. Oh, and leave out awkwardly emotionless spoken words performances like “Meine Hölle” and stupid shit like the silly singing on the hidden track! I did things like that as a child when I found out how to record my voice but it definitely doesn’t belong on a Metal record, believe me! www.psychotron.de