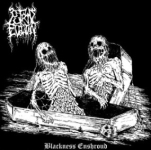 Putrid Death Metal from Chile is what this band throws at our ears, a barbaric and brutal tour de force of chaos and darkness, summoned from the depths of obscurity and doom. PUTRID EVOCATION has a killer guitar tone and some parts that remind my of another band, a band that lingers in limbo in the back of my head, though won’t emerge from the depths. Though they do it good, a rancid bastard of the old school Swedish Death Metal and American obscure brutalists as INCANTATION, IMMOLATION and the likes and a good dose of South American madness, sick, twisted and demented in that perfect way we like our Death Metal. Most of the time things are very straight forward, though there are some interesting twists and turns, and the atmosphere the guys rack up are immense and drawing. The instrumental intro is building up the atmosphere that lasts through out the EP perfectly and punches into the first ‘real’ track ‘Infernal Domain’ with power and conviction. This isn’t all that original, but the music is delivered with soul and intensity, so it is more or less impossible not to be drawn into the universe of PUTRID EVOCATION. I found this release a bit bland, after the first spin, though as time has passed and the album has gotten a good deal of listens, it has grown quite a lot and I sincerely hope to hear more from these madmen soon! Though the alleged cover version of NIHILIST’s ‘Supposed To Rot’ puzzles me a bit, first a long intro and then a very slow version, with the riffing dragged into a doomy pace, I can’t pick out much of the riffing from the original, nor the atmosphere, even though the atmosphere on the track here, is immense, it doesn’t remind of the original, and it is missing the pukes as well, as this is pure instrumental, I know many are speaking for cover versions not too close to the original, though it would be cool to hear just a tad of the original or at least to know the story behind the version, so it might could have made sense. More information you’ll find at www.facebook.com/putridevocation, http://putridevocation.bandcamp.com, www.facebook.com/apocalyptic.zineprods