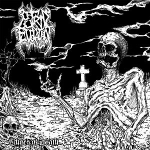 The Metal scene in Chile seems to grow bigger and better every month. Once upon a time, the Chilean scene was smiled at as an exotic scene, like it happened with all other South American countries. Meanwhile, this country has some fine, mainly extreme Metal acts to offer. With PUTRID EVOCATION, we have a real fuckin’ highlight, not only for Chile in special, but for South America in general. Let’s face it: PUTRID EVOCATION are a damn highlight for Death Metal worldwide! This young trio already released an EP in 2013, “Blackness Enshroud”. Now their first full length strike is available worldwide on Xtreem Music, who once again dug out a hidden gem. “Echoes Of Death” is of course based on all the Death Metal that is already here. But PUTRID EVOCATION mix all these manifold influences to create a very unique blend of Death, with a lot of Doom Death moments meeting brutality and raw and fast attacks. Sometimes you feel reminded of big and influential names like INCANTATION or Swedish heavyweights, but the sound of these Chileans is rather unique and very fresh. “Echoes Of Death” starts off with an ‘Intro (Horror From The Cemetery)’ that brings us tons of heaviness before it blends into the damn doomy title track that even has some moments of the mighty WINTER having a jam session with INCANTATION. The following brilliant ‘Revelation Of Hell’s Apocalypse’ is a little more influenced by Swedish Metal of Death. And the brilliance won’t stop… Be it the rather fast ‘Vengeance From The Crypts’, the rabid ‘Morbid Sacrilegious’ with its crushing middle part or the nearly progressive ‘Unquenchable Flame’ with its ultra heavy Doom part – every song here hits right where it hurts. But my personal fave on “Echoes Of Death” is ‘Horrible Disease’ with a HELLHAMMERish intro piece and a very Doom based rhythm, destroyed by fast and extremely brutal breaks. An outstanding song on an outstanding album! As the final original track we have ‘Total Death’, that is very Scandinavian in the beginning, with some regards from Suomi. Talking about Finland: in the very end, PUTRID EVOCATION present us a well chosen cover tune with ‘Putrid Intercourse’, originally from the first CONVULSE album “World Without God”. That’s paying tribute where tribute is due! And that also means hitting the start button again to listen to “Echoes Of Death” once more. And more and more… Any Death Metal lunatic out there is addressed to give PUTRID EVOCATION a chance at: www.facebook.com/putridevocation, or check the label: www.xtreemmusic.com