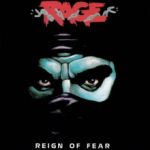 I first became aware of RAGE when I started reading Metal Hammer around the time when "Perfect Man" was released (I just looked it up… 1988… I feel old now). I liked their logo a lot… and that’s pretty much where it ended. I remember that I had both "Execution Guaranteed" and "Perfect Man" on tape, but truth be told, this is my first introduction to their debut album from 1986 – an album that I always used to avoid in every record store because of the godawful Ninja cover. But I digress already… this is a double CD here, with the entire album plus the bonustrack from the original CD release on the first disc and a whole lot of bonus material on the second disc, but we’ll get to that later. Well… what can I say? Listening to "Reign Of Fear" in 2017 proves that avoiding this record so far wasn’t the worst idea of my life. It’s not bad, far from it, it’s just… generic. While I like old fashioned Metal as much as the next dude with a denim vest, there is not a lot happening here in terms of songwriting, just riff after riff, then a chorus, all rounded up with high pitched screams. And yes, I know that this is in fact a recipe for a great Metal record, but it’s the sound that ruins it all, even by the standards of 1986. Even if we leave the heavier side of things aside (POSSESSED, VOIVOD, KREATOR and so on, you know what I mean), "Reign Of Fear" is mediocre at best – considering the year’s output of bands like SAVAGE GRACE, HELSTAR, EXCITER or FLOTSAM AND JETSAM. And these bands are the cornerstones of the league that RAGE wanted to play in: fast, melodic, riff driven Metal… somewhere between Speed and Power Metal, but essentially lacking, well… speed and power. But onward to battle, onward to disc two: much better! The 13 songs (3 more than the album itself, ha!) kick some serious ass. Half demo songs, half rehearsal recordings, all awesomeness. These versions (not counting the 2 unreleased demo songs, ‘Tough Like Leather’ and ‘Stay Wild’) are twice as raw than the ones that ended up on the album and guaranteed to make even my hair grow long again. Still, it doesn’t come as a surprise that the original pressings are widely available in bargain bins. It was only with the next to albums that RAGE finally delivered the goods… but that’s another story for another time (and another good example how different tastes can be… while I was always a die hard fan of the entire AVENGER (pre – RAGE) and "Reign Of Fear" material – still am after so many years – I pretty much gave up on the band with the release of "Execution Guaranteed" – Frank). More about RAGE at: www.rage-official.com, www.facebook.com/rageofficialband