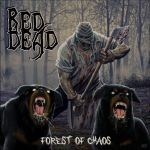 RED DEAD began their journey in October 2011 in Soustons, a commune in southwestern France, and released their debut EP “I Have Worn Thee” in 2012 via Chabanes Records, followed by a live EP (independently produced) in 2014, which was recorded at Lembarzique in 2013. Until then, RED DEAD had mostly played with programmed drums, however right after the release of the live EP drummer Tony joined the troops to fill the void. They continued to work until 2016, when a massive line-up change took place with the departure of guitarist / songwriter Roger and bass player Lolo, two of the founding members, followed by the arrival of Vincent on rhythm guitar and Antho on lead guitar. With this revamped line-up, they recorded their debut full length “Therapy Of The Evil”, which was released in September 2017, in association with Great Dane Records. A definitive statement of uncompromising old school Death Metal created for fans of old MASSACRA, old CANNIBAL CORPSE, old OBITUARY and old SEPULTURA. In 2018, the release of the 3-way split “Sons Of Red Visions” set the way for their second studio album “Forest Of Chaos”, which was released through their old association Great Dane Records. The band’s name leads to think of a concept behind each of their records with songs expressing Red’s thoughts and feelings or certain parts of his life. Concerning that, in an interview a band member expressed that – “If we want to talk about Red, he is the main character and he has been the thread of our stories from the start. He is the master of the place. With dreams, thoughts, feelings, sensations, images in his mind – Red accompanies them on their quests and they become loyal allies for his annihilation project. We re-transcribed his journey in our songs. We also included 1 or 2 legends per album on the passage of Red, ‘All Hallows Evening’ (half-legend of Halloween), ‘Ghost From The Old Port’ (legend of Lithuania), ‘Red Eyes Children’ (Urban legend) and ‘Servant Of The Death’ (legend of Ankou). I invite readers to take a look (and even both) at his story on our site”. Like their words, the original story of Red can be found on the band’s website, which is well written, sticks perfectly to the skin of the character and without any doubt the songs ‘Funeral Path’, ‘The Gatekeeper’, ‘Black Valley’, ‘Red Eyes Children’, ‘Old Skull Road’, ‘Wind Of Chaos’ and ‘Into The Void’ thoroughly transcribed their thoughts. Drummer Tony deserves a special mention for his beastly craft work that must have driven by the fantastic combination of traditional Death Metal riffs akin to American school and certain Swedish school vibe with the classic buzz-sawing guitar tone embedded. And singer Roolet delivered like a frenzied conductor who not only perfectly harmonized with the instrumentation but also alternated growls and screams to mark the different passages quite effortlessly. Having mentioned that, it was recorded in La Tanière Records and Red’s home, the overall production sounds organic which established the sordid environment to convey mood of madness and primitive animalism throughout the whole record. The association with multi-faceted Spanish artist Jose Antonio Vives, who also contributed to the debut, seems like a great choice as he truly evoked the essence of “Forest Of Chaos”. RED DEAD seems like becoming a worthy torchbearer of the great legacy of all those legendary Death Metal bands from the mid 80s (POSSESSED, DEATH, AUTOPSY, NECROPHAGIA or CANNIBAL CORPSE) and with this new record they certainly will be an immense force in the growing roster of French Death Metal specialists Great Dane Records. For any fan of traditional and heavy music, “Forest Of Chaos” can be one of the first highlights of 2020. Find out more about the band at www.facebook.com/reddeaddeathmetal and visit their label page at www.facebook.com/greatdanerecords.