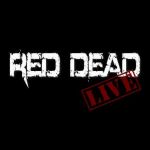 From the Aquitaine area in the south west of France, RED DEAD went on their way to show the world that the French Metal scene is still alive and well. And in addition, they prove that there are new bands worth checking out. RED DEAD is, of course, one of these bands. “I Have Worn Thee” was the title of their first strike, a demo EP that came out in 2012. Now, two years later, they are back with a new EP that was recorded and therefore entitled “Live”. Well, not really live in concert, at least you won’t hear any audience here. But the fact that the songs were recorded live leads to a very raw and pretty dense sound that fits the style of RED DEAD very well. Especially in comparison to the sometimes a little too chaotic sound of the first demo. So, we have nine tracks here, including five songs from “I Have Worn Thee”, and they prove that we shouldn’t forget France on our recent world map of Death Metal. The opener ‘Apokalips’ already convinces with a variety of speed, from grooving mid tempo parts to fast outbreaks, garnished with pretty melodic breaks. ‘Taste Of Blood’ comes along a little straighter in mid tempo, reminding me a little of BOLT THROWER. Not the worst reference I should say… The older song that profits most from the better recording is the ‘I Have Worn Thee’, a very complex, thrashing song with a lot of breaks that comes along a lot more enjoyable in this version. RED DEAD keep their level of combining Death and complexity with ‘Schizophrenia World’ without any problem, before they enter the pit of the groove again with another newer song, ‘Lethal Hoax’, that also doesn’t lack of breaks and a few faster parts. One of my faves here is ‘Guerria’ that sometimes even touches the doomy regions of Death. ‘Waltz With The Death’ and ‘Emigrate’ from the first demo are both on the more complex side as well, before another new one finishes the EP. ‘Letter To Humanity’ is a fine groover again with a few cool melodic lead guitars. Furthermore, it’s one of the highlights and a very good way to close an EP that wets the appetite for more. In my humble opinion, the four new songs here are better, with improved skills in song writing, so there is another reason to keep an eye on RED DEAD in the future. Those here, who are into Death Metal that is a little more complex, yet not too fiddling, should also give these French guys a chance. And if you want to check them out: the demo “I Have Worn Thee”, that is not available anymore, can be downloaded for free here. Find out more at www.facebook.com/reddeadmetal or red-dead.bandcamp.com