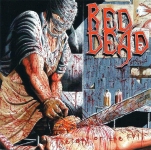 After two demo releases, “I Have Worn Thee” in 2012 and “Live” in 2014, it took the French Death Metal quartet RED DEAD three more years to finally unleash a full length album. It got baptised “Therapy Of The Evil” and was put out by the also French label Great Dane Records. Was it worth the three year wait especially after the promising stuff on “Live”? After a few turns I am pretty sure to say “Yes!”. The ten songs (plus one intro) are completely new and present RED DEAD a little more mature, yet still crude and brutal enough. The sound on “Therapy Of The Evil” is still raw and completely unpolished, such imperfect that it is a pure joy. The guitars in particular sound very special, since they sometimes have a kind of “shimmering” tone that reminded my of the first WHIPLASH album. I haven’t heard these kind of guitars in ages and it adds a refreshing and unique note to the sound of RED DEAD. As far as the songwriting is concerned, RED DEAD made a big step forward. The new songs are a little more straight than the ones on the demo recordings, but this straightness helps the songs to reveal their full impact. In addition, RED DEAD added some fine ideas to their songs as well to keep them thrilling. I personally like the touch of old CONCRETE SOX stuff in ‘All Hallows Evening’ and the cool leads in ‘Cut And Kill’ most. But also the intro piece of ‘Demons Visions’ that sounds very much inspired by classic Metal is very great and the cool breaks make this one a real highlight on “Therapy Of The Evil”. In combination with the still slightly complex, diversified and yet brutal Death Metal that RED DEAD always played, we have a very good and balanced debut album here. “Therapy Of The Evil” shouldn’t be missed by all of you gem hunters and lovers of fine Death Metal who are hungry for great new flesh. To find out more on RED DEAD visit www.facebook.com/reddeaddeathmetal and red-dead.bandcamp.com to listen to them. Label contact: www.greatdanerecs.com