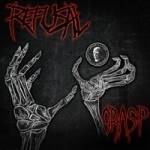 "Feel free to copy this CD and make some money with it", says Finnish grinding Death Metallers REFUSAL’s brand-new 4-track effort, carrying the title "Grasp". Well, we all want to make some extra money – and this may perhaps be one way to do it? Eh, maybe not but hey – nothing stops you doing so, especially now when you have even got the band’s official permission to do so. "Grasp", however, shows once again REFUSAL’s undying love towards NAPALM DEATH; I mean, a stripped down version of NAPALM DEATH musically to be more precise, without those ‘let’s-ride-with-a-burning-nuclear-missile’ parts that obviously are a part of fun in latter mentioned’s case. REFUSAL keep their things simple and even kinda generic at times but despite that these disturbed Finnish Deathgrinders manage to offer a solid piece of Metal’s extremities on "Grasp". Especially the last song on this 4-track effort, called ‘Cleaning The Waste’ succeeds in winning some of my extra sympathies for being a bit more experimental sounding song from them, without loosing its charm one damn bit. As it’s been a continuous case with this hard grinding Death Metal patrol – at least ever since I heard their previous demo "Short On Ammo", they already do know clearly how to entertain enough a regular Death Metal consumer. Considering this is already their 6th demo – and no label has snapped them yet, then use this other option and release a full-length album on your own. You would hardly loose anything – well, except your hard-earned money by investing into it. Anyway, somebody needs to throw the first rock, so why not? More can be found at: www.refusalband.com, or www.reverbnation.com/refusal