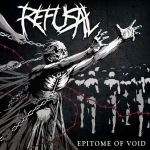 REFUSAL, sounds like a punkish Hardcore outfit from the suburbs, but the initial shock was to know that they are a crusty old school Death Metal band with a fleshy blend of Grindcore, spawned from Helsinki, back in 2008. They went through several line-up changes over the years but amid that managed to release seven demos and a compilation. After all these mini releases, their first full length album “We Rot Within” was released in 2016 via German label F.D.A. Records. “Epitome Of Void” is the title of their sophomore album released in January of 2019 and being made available via French record label Great Dane Records. This new offering consists of nine brutally blunt tracks, comprising nearly 32 minutes worth of insanity. Musically, it continues in the spirit of the first album, but there are more variations in the songs and with unadulterated assimilation of intense energy and innate darkness along with the lyrics moving in bearish and gloomy subjects of the individual level; an inner sense of paranoia and murkiness belongs to the sound and the compositions of the whole record. Almost like artillery firing, the beginning of the first two songs will give a smell of NAPALM DEATH, but will plunge into slower phase though the third track title is ‘Disregard’. While ‘Disgust’ is deeply inspired by CANNIBAL CORPSE, ‘Slaves’ is definitely the slowest of this album and contains much more guitars compared to other songs. ‘Exploit’ proceeds very straight forward with D-beat and blast beat; the only song that takes less than two minutes. Continuing with ‘Futile’, which delivered high speed Punk warfare; the album finishing line ‘Void’ kept the traditional Finnish texture, which is a bit more melodious than the other songs and the atmosphere became consuming, like welcoming the end after spells of furious madness. REFUSAL delivered familiar and sometimes rather formulaic Death Metal but still manages to work in its own favor by proficient assembling of brutally grinding and contagious energetic nature, which without any doubt make them a rather unique outfit among other Finnish Death Metal bands, in comparison of the distinctive dismal, amorphous and rotten style of old school Finnish Death Metal we all used to be exposed. Ardent fans and followers of Finnish Death Metal shall explore this release to experience the whole extent of it. To know more about the band, visit www.facebook.com/refusalband and check out the label at www.facebook.com/greatdanerecords.