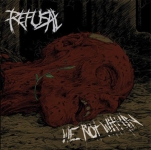 F.D.A. Records took almost my entire salary during 2011, putting out some killer releases that helped the label to become a bigger and well established underground company. Since then I’ve kept my eyes (and ears) open to whatever F.D.A. is putting out month after month, year after year. While the label has been tagged as an (almost) exclusive Death Metal label, there have been releases from other genres that have been a nice surprise (OMEGA SOUL). This year F.D.A. once again outshined other labels by putting out some great releases by SKELETAL REMAINS, FATALIST, REVOLTING, CHAPEL OF DISEASE, OBSCURE INFINITY, etc. However, there are 2 releases that are a bit off the hook from what this record label is known for, and one of them is part of the releases that will hit the street in early 2016. REFUSAL is a band from Finland that has a good background in the shape of demos and EPs for the last few years. While their sound is rooted in Death Metal, what makes this bad withstand among other bands is the fact that they add some sort of groove vibe (almost Hardcore-ish, Crust-ish) to the mix. These additional elements aren’t new to Death Metal but there are different ways and structures to add those sections. “We Rot Within” is a bit… generic… I think. No offense, it’s still an enjoyable record but the groove elements kill the vibe for me. I can compare this record to what other bands have done, like COLDWORKER, INHALE/EXHALE, INEVITABLE END, etc. comes to mind, but have failed to make them catchy enough to make people pay attention to them due to those add-ons to their music. The Death Metal parts are good, actually very good, but the hooks are not there, it doesn’t keep me interested enough to not skip the groove sections. In a way I’m glad there are bands still trying out new things in this already saturated genre, but I also think some ingredients are not meant to be mixed because your outcome could end up lacking both the basics people would like to hear and the topping is not good enough to fix the mess. Give yourself a try to REFUSAL, and I hope the next album eliminates the ultra-processed vocals. Check them out here: www.refusalband.com, www.facebook.com/refusalband, www.fda-records.com